South to variable winds this morning - looking a bit junky with the storm passing and big high tide. New W swell is filling in - around 6-7 ft at 15-17 seconds. Look for that swell to hold thru New Year's Eve - then we get a bigger W swell New Year's Day into Saturday going back into the double/triple overhead range at stand out WNW facing spots. Could still have some light southerly/variable winds Thurs/Fri - and then wind conditions could clean up more on Saturday and Sunday. So plenty of swell to continue, just check the winds each morning. We also have some big high tides (plus 7ft) next two mornings. Happy New Year and cya in the water.
at 9:11 AM No comments:

How good does Ocean Beach get? 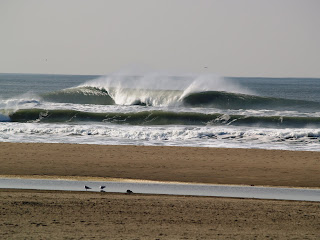 Thanks Bryan Hawken for the picture - from 12-9. Triple overhead day almost looks friendly.....
at 4:22 PM No comments:

Large, long period swell will rapidly fill in overnight. Outer buoys are in the 17-19 ft range at 15-17 seconds. Look for double overhead ++ sets at top NW facing spots. Winds are iffy right now - as we have a storm moving through. S/SE direction suppose to change to N/NE tomorrow afternoon - we'll see. Swell will stick around on Monday - a bit smaller. More waves and potential on and off weather through next week. But plenty of surf. cya in the water.
at 3:56 PM No comments:

Winds are veering North tonight and should be blowing NE/E (offshore) by Thursday and Friday mornings. Could even see lighter winds tomorrow morning (Wednesday) but things might still be a bit bumpy after all this NW wind. We have back to back WNW swells in the water, one winding down tomorrow and then a new swell incoming Thursday, peaking Friday. Should see peak sets with this swell to several feet overhead at NW facing breaks. Good direction on these pulses - 270-300 degrees. A new storm is taking shape tonight in the Central Pacific - quite impressive on satellite - and that could kick up a much larger swell for the upcoming weekend. More on that swell event Friday. If the models are correct - we could unfortunately see a pretty strong turn to wet weather this weekend as well which might negate the incoming swell train in terms of quality. The Pacific Basin is super active - El Nino is still gaining some strength and I don't believe we've seen the full impact yet of this building event in terms of swells and storms. It's overtaking 3 years of La Nina in the upper atmosphere and that requires a huge amount of energy to reverse that cycle. Something that has been going on for many months now. So we could very well be in for a wet and wild January and beyond. Time will tell. In the meantime, enjoy the good run of weather and surf upcoming. Cya in the water.
at 9:42 PM No comments: 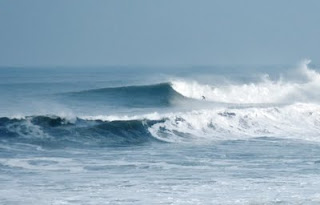 Something to ride over the next 7 days - just variable swell heights with different swell trains inbound. Weather looks pretty nice this weekend with offshore flow through the period. Chance of very light rain maybe Monday/Tuesday - but it certainly doesn't look like gully washer. High pressure should re build over us for dry weather through Christmas. Swell wise, current WNW swell is winding down - but looking for a bump up again this weekend into Monday - another shot of west swell projected at 10-11 at 15 from 263 at it's peak on Sunday. More long period stuff due in Xmas eve and and Christmas Day - in the 7-10 ft range with longer periods at 17 sec and more northerly at 296. All n all - looks damn fine. The SF and Bodega buoys are both offline now and not scheduled to be redeployed anytime soon. The Calif buoy is also offline with no date to be re set. Makes forecasting incoming swells really hard. My advice is to stay on the SE Papa Buoy (600 miles offshore) and then check the SF Bar buoy which gives a spectral breakdown of incoming surf - but no wind or water temp data. Usually inbound swell at the SE Papa Buoy comes in 20-40% smaller once it hits the SF Bar buoy to account for the swell diminishing in size as it gets farther from it's source. At this rate we might have to go back to the old school way of forecasting - get in your car and drive and get what you get! Happy Holidays to everyone and I'll see you in the water.
at 10:35 AM No comments: 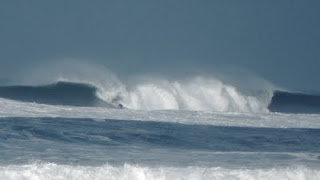 Rain returns Tuesday starting in the North Bay and working south by Wednesday. Look for strong south winds near the coast and copious amounts of rain from Marin County to points north. This system is going to kick up a strong WNW swell - building to 8-12 ft on Wednesday - with Thursday being the peak day - 15-18 ft deep water - and forecasted light winds. Swell direction 279 to 281 deg. Friday winds may stay light and swell will drop with sets several feet overhead. Winds look light this am from the south - leftover westerly windswell from the storm that came through over the weekend. cya in the water.

**Some Forecasting notes - the SF Buoy appears to be offline since the weekend - it may have pulled off it's location and is adrift. Bummer for checking inbound swells. I'll try and see how long it's going to be out. Also - the Quickscat satellite - which provides wind speeds and direction information over the ocean to NOAA has come offline and probably won't be repaired this winter. This is a big blow to forecasters and will most certainly limit (somewhat) the ability to accurately predict surf heights. There are other tools forecasters use - but the quickscat is a very valuable satellite.
at 7:12 AM No comments: 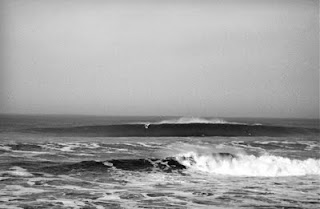 Thanks to Sean for the great pics. I'll post more of his stuff from our recent run of swells over the next few weeks. As for us, break in the groundswell on Sunday with N windswell the rule - as we have a modified arctic airmass and associated front decending on us from the Great White North. Cold, yeah, snow, maybe. Could see a dusting of snow on our local mountains by Monday morning for sure. Then late next week the flood gates open with wet storms after Wednesday, through the early part of the following week. The super storm which is going to send Hawaii 40-50 ft surf! on Tuesday is also sending groundswell in our direction to the tune of 15-18 ft (some 25ft) deepwater stuff on Wednesday. Rumor has it that the Eddie and the Mavs contest could both go off this week - something that is quite unusual. But it's an El Nino year and just as predicted the North Pac is unleashing a relentless parade of swells with no end in sight really. Winds look WNW right now starting tomorrow thru Tuesday. Then we might see a period of East winds starting Tuesday night through Wednesday. And with that big swell, could be pretty amazing. All and all next week looks Nor Cal wild with a bit of everything. Keep an eye on the buoys and winds and you might just find a few nuggets. Cya in the water.
at 10:38 PM No comments:

Terry Fitzgerald 'The Sultan of Speed'

One of the most stylish and influential surfers of all time - great old footage of Fitz, Wayne Lynch and others in this clip. Makes you want to ride a single fin! 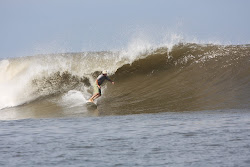